← more from
Strut
Get fresh music recommendations delivered to your inbox every Friday. 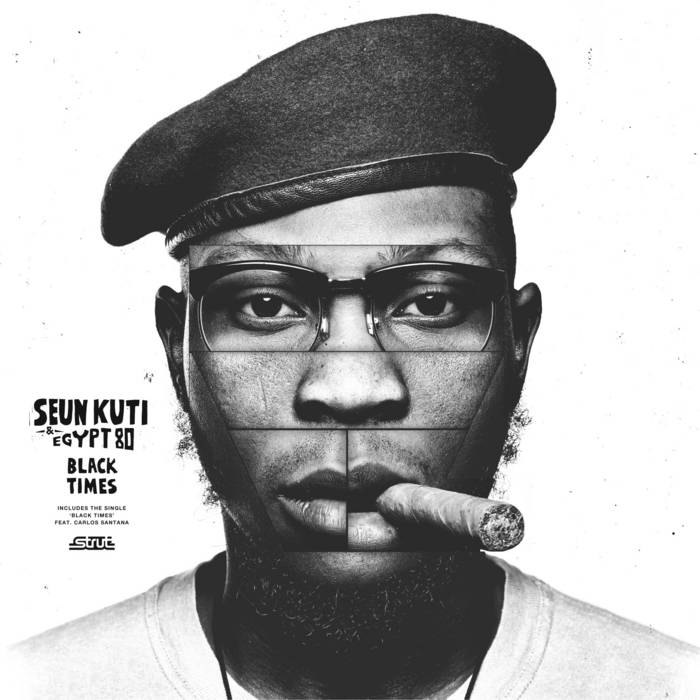 Torsten What an amazing album full of rhythm and energy, I couldn’t sit still while listening. And Seun’s Lyrics are so to the point.

Nacho Sevilla Priestley Necessary lyrics, powerful music. And the other way around.
more...

Strut presents the new album from the modern day leader of Afrobeat, Seun Kuti. The youngest son of Afrobeat legend Fela Anikulapo Kuti is as incensed by injustice as his father ever was and, with his mighty new album Black Times including features from Carlos Santana and Robert Glasper, he honours the revolutionaries who have gone before and rallies the torch-bearers to come.

Black Times is the fourth album by Seun and Egypt 80, the extraordinary dance orchestra created by Fela Kuti as a conduit for the common people. Inherited by the 14-year- old Seun in 1997, the younger Kuti has been building to this, his most accomplished and honest album yet. “Black Times is a true reflection of my political and social beliefs,” says the singer, bandleader and musician, 34. “It is an album for anybody who believes in change and understands the duty we have to rise up and come together. The elites always try to divide the working class and the poor people of the world. The same oppression felt by workers in Flint, Michigan is felt by workers in Lagos and Johannesburg.”

Here, then, are tracks designed to spark conversation and realign priorities. The elegant ‘African Dreams’ insists that commercial success counts for little. Pay no heed to examples set by “accepted” African-American celebrities, says Kuti, and marvel instead at the philosophies of such great thinkers as the late Pan-Africanist Doctor Amos Wilson. “The message,” Kuti sings, “is free.” ‘Black Times’, with its rousing male and female harmonies, furious guitar riffs and Kuti’s soaring tenor sax, gives us truth. Lyrics such as “Understand your history / rise to be free” shine a forensics-style black light on that which is otherwise hidden, intensified by the axe-work of Carlos Santana. ‘Bad Man Lighter’ is a horn-heavy track calling out duplicity and defending the right to smoke the good weed; the politically charged ‘Corporate Public Control Department (C.P.C.D)’ is a roiling protest anthem directed at Muhammadu Bahari’s Nigerian government and indeed, at deceitful politicians the world over. Co-written with veteran Egypt 80 saxophonist Abedimeji ‘Showboy’ Fagbemi, the frenetic, finger-pointing ‘Kuku Kee Me’ borrows from a Nigerian saying (“When someone is always on your case, you’re like ‘Save yourself the stress and kuku kill me now’”) while ‘Theory Of Goat And Yam’ ridicules a homily invented by former Nigerian president Goodluck Jonathan, who justified corruption by likening politicians to goats tempted by yams: “By taking money meant for a hospital or to build roads, they are actually costing human lives.” ‘Last Revolutionary’ featuring Robert Glasper’s keys is a paean to authentic leaders past, present and future, name-checking homegrown African heroes, revolutionaries and freedom fighters like Kwame Nkrumah, Thomas Sankara and Patrice Lumumba. “I say the names of these men who died for us without any promise of resurrection,” says Seun Kuti. “Maybe it will cause a young man or woman to wonder who they are. Maybe they will Google them, then set out on a journey whose destination is unknown.”

“We are all capable of change, us iron people, us workers. Black Times is the sound of the people, and a weapon of the future. The big picture needs more colour.”

Bandcamp Daily  your guide to the world of Bandcamp